Maasai: the authentic people of Kenya – a tourist favorite

“It takes one day to destroy a house; to build  a new house will take months and perhaps years. If we abandon our way of life to construct a new one, it will take thousands of years”, Maasai belief.

The Maasai tribe is the most authentic ethnic  tribe of Kenya. The Maasai tribe (or Masai) is a unique and popular tribe due to their long preserved culture. Despite education, civilization and western cultural influences, the Maasai people have clung to their traditional way of life, making them a symbol of Kenyan culture.

Maasai’s distinctive culture, dress style and strategic territory along the game parks of Kenya and Tanzania have made them one of East Africa’s most internationally famous tourist attractions.. Maasais speak Maa, a Nilotic ethnic language from their origin in the Nile region of North Africa.

History of the Maasai Tribe

It is thought that the Maasai’s ancestors originated in North Africa, migrating south along the Nile Valley and arriving in Northern Kenya in the middle of the 15th century. They continued southward, conquering all of the tribes in their path, extending through the Rift Valley and arriving in Tanzania at the end of 19th century. As they migrated, they attacked their neighbors and raided cattle. By the end of their journey, the Maasai had taken over almost all of the land in the Rift Valley as well as the adjacent land from Mount Marsabit to Dodoma, where they settled to graze their cattle.

The Amboseli National Park, Nairobi National Park, Masai Mara Game Reserve, Samburu, Lake Nakuru, and Tsavo National Parks in Kenya and the Manyara, Ngorongoro, Tarangire and Serengeti parks in Tanzania all stand on what was once the territory of the Maasai tribe.

Today, the Maasai people live on a smaller piece of land in the Kajiado and Narok districts, surrounded by these now Kenya’s fine game reserves. Many practice nomadic pastoralism, while others have been absorbed into modern day jobs working in tourism where they showcase their culture to visiting tourists.

The warrior is of great importance as a source of pride in the Maasai culture. To be a Maasai is to be born into one of the world’s last great warrior cultures. From boyhood to adulthood, young Maasai boys begin to learn the responsibilities of being a man (helder) and a warrior. The role of a warrior is to protect their animals from human and animal predators, to build kraals (Maasai homes) and to provide security to their families.

Through rituals and ceremonies, including circumcision, Maasai boys are guided and mentored by their fathers and other elders on how to become a warrior. Although they still live their carefree lives as boys – raiding cattle, chasing young girls, and game hunting – a Maasai boy must also learn all of the cultural practices, customary laws and responsibilities he’ll require as an elder.

An elaborate ceremony – Eunoto – is usually performed to “graduate” the young man from their moran and carefree lifestyle to that of a warrior. Beginning life as a warrior means a young man can now settle down and start a family, acquire cattle and become a responsible elder. In his late years, the middle-aged warrior will be elevated to a senior and more responsible elder during the Olng’eshere ceremony.

Maasai children enter into a system of “age-sets” with peers where various life stages, such as circumcision, are marked with ritual and ceremonies. At the age of 14, girls are initiated into adulthood through an official circumcision ceremony known as Emorata.

Presently, the female circumcision ritual is outlawed in Kenya and its use is diminishing from the Maasai women’s culture. Young Maasai girls are still taught other functional roles like how to build houses, make beadwork, and cook and clean their homes, by their mothers and older women. When they come of age, their parents “book” a warrior from a respectable clan as an appropriate husband for their daughter.

Since the Maasai lead a semi-nomadic life, their houses are loosely constructed and semi-permanent. They are usually small, circular houses built by the women using mud, grass, wood and cow-dung.

The men build the fences and sheds for the animals.

Maasai and their cattle

The Maasai tribe has a deep, almost sacred, relationship with cattle. They are guided by a strong belief that God created cattle especially for them and that they are the sole custodians of all the cattle on earth. This bond has led them into a nomadic way of life following patterns of rainfall over vast land in search of food and water for their large herds of cattle.

The Maasai tribe measures wealth by the number of cattle and children one has.

Though they traditionally dressed in animal skins, Maasai woman with beaded jewelry – everyday Maasai dresstoday, typical Maasai dress consists of red sheets, (shuka), wrapped around the body and loads of beaded jewelry placed around the neck and arms. These are worn by both men and women and may vary in color depending on the occasion.

Ear piercing and the stretching of earlobes are also part of Maasai beauty, and both men and women wear metal hoops on their stretched earlobes.

Women shave their heads and remove two middle teeth on the lower jaw (for oral delivery of traditional medicine). The Maasai often walk barefooted or wear simple sandals made of cow hide. 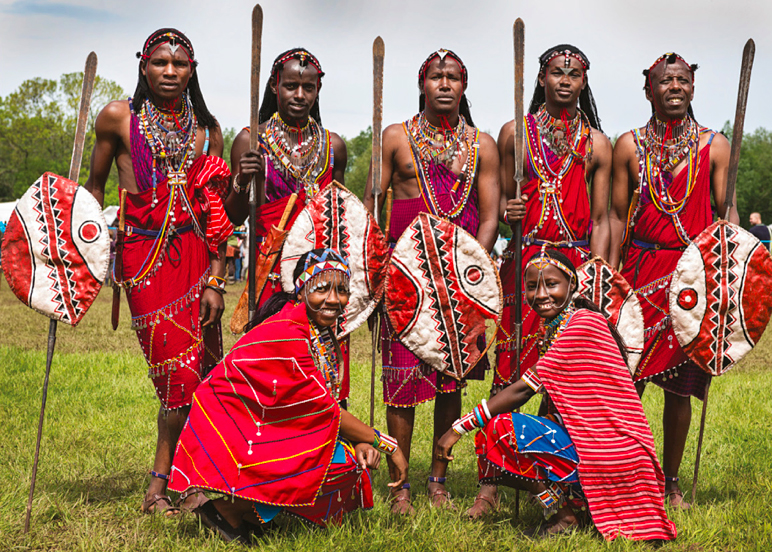 All of the Maasai’s needs for food are met by their cattle. They eat the meat, drink the milk and, on occasion, drink the blood. Bulls, oxen and lambs are slaughtered for meat on special occasions and for ceremonies. The by-products of the animals – skin and hides – are used as bedding while cow dung is used for building (it is smeared on the walls). The Maasai’s entire way of life truly revolves around their cattle.

The tours also provide an ideal opportunity for participants to take part in the Maasai dance and buy traditional Maasai jewelry, art and crafts to take home as souvenirs.

To enjoy and experience this Kenyan heritage,

Best “Hang out” in Nairobi

An Essential Guide to Cape Town