Safaris conjure up images of beautiful landscapes, breathtaking wildlife and shared experiences with cultures where one can learn about the inspiring, strong women of Africa.

To celebrate International Women’s Day, Passage to Africa has shared a collection of photographs taken by their team of well-travelled safari guides. The collection ranges from the powerful Hamar women of Ethiopia to the enigmatic Himba of Namibia.

Note: All these images were taken respectfully, intelligently and sensitively by experienced guides who have a deep understanding of the good, the bad and the beautiful of cultural tourism. 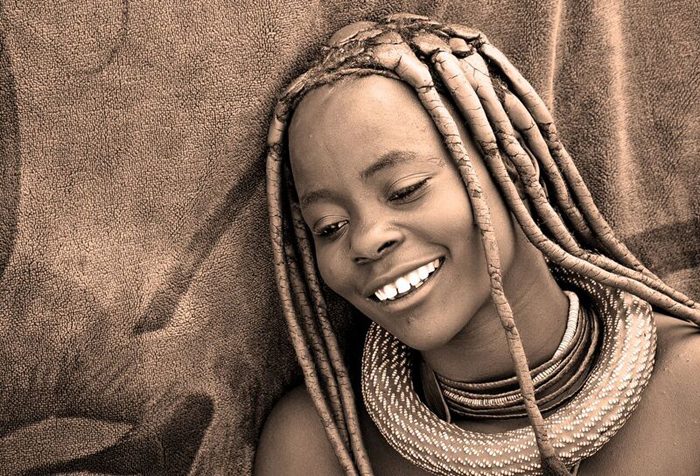 The statuesque Himba women are indigenous to the arid Kunene region (formerly Kaokoland) of Namibia and southern Angola.

Women form the core of Himba society. Men and boys are often away from the homestead for extended periods, tending to their livestock. As such, community life is orchestrated by women who take part in and give roles to young children and girls, such as sourcing and carrying water and firewood, milking livestock, plastering earth walled huts, preparing meals and caring for children – a community task in which women and girls take care of other women’s children.

The paste of butter fat, ochre, and herbs that they apply to their bodies and hair gives the Himba their iconic red hue. The paste cleanses the skin in this water scarce region, and also protects them from the sun and mosquitos. It’s symbolic of the red earth and blood, the essence of life, in which women play the most significant role in Himba society. 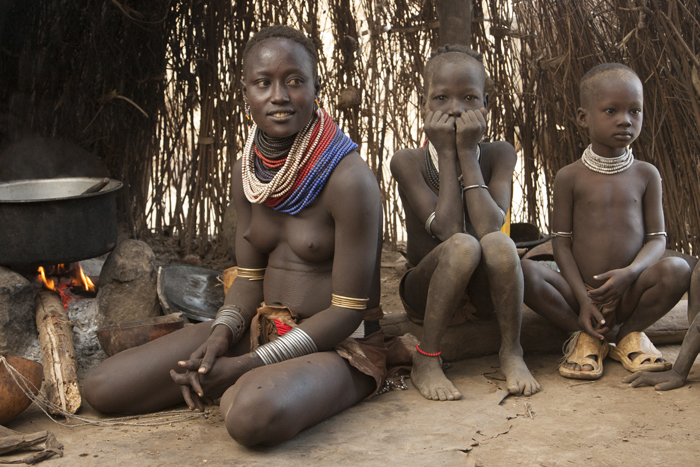 Numbering about 2,000 people, The Kara (or Karo) tribe is the smallest ethnic group in Ethiopia’s Omo Valley. For the Kara, esteem and beauty are literally skin deep. Like many Omotic tribes, the Kara practice scarification. Traditionally for men, their scars are symbolic of how many dangerous animals they have killed. For women, it is a sign of beauty. The scars are created by rubbing ash into cut skin to produce a keloid effect.

Theirs is traditionally a patriarchal culture, but as photographer Jane Baldwin, who has been documenting the lives of Ethiopia’s indigenous women, writes: “Elder women accept their role as wives and mothers and the constraints of their patriarchal culture. They understand that their culture is changing, that young women will want to do things differently. Young women have begun to protest against arranged marriages. They want to marry their boyfriends, the men they love. Girls openly complain to their families at being forced into marriage. Several years ago, to avoid an arranged marriage, a young Kara girl committed suicide by jumping into the Omo River. She was swept down a river inhabited by Nile crocodiles. Elders have now begun to reevaluate this tradition and parents are beginning to listen to their daughter’s wishes.” 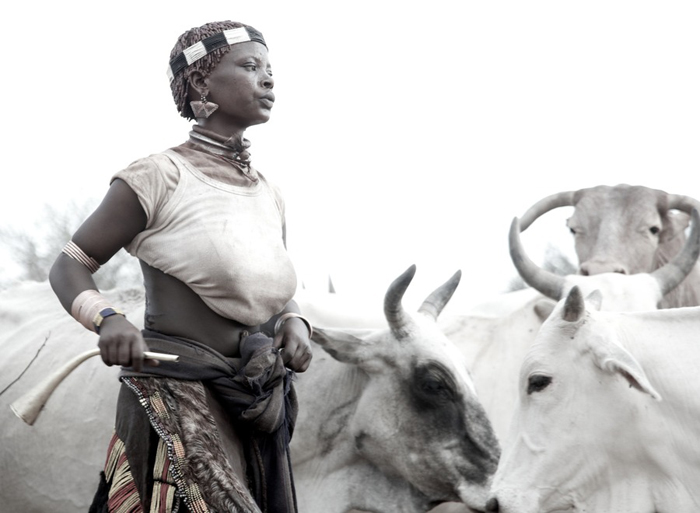 Men and women of Ethiopia’s Hamar tribe engage in an astounding ritual which is both fascinating and horrific to outsiders. A man comes of age by leaping over a long line of cattle, qualifying him to marry, own cattle and have children. In a practice which is apparently consensual, the female relatives of the young man beg to be whipped as part of the ceremony to show their allegiance to him. One effect of the whipping is to create a strong debt between the young man and his sisters – if they face hard times in the future, he will come to their aid.

In a remarkable twist of fate for this patriarchal society, the age difference between husbands and wives means that women actually have great status in society. Because men tend to be older than their wives, they often die first leaving the widow as the head of the household. Consequently the widow has power over her husband’s brothers (if their parents are already dead) and their livestock, and a recent study found the number of widows far outnumbered that of married women. 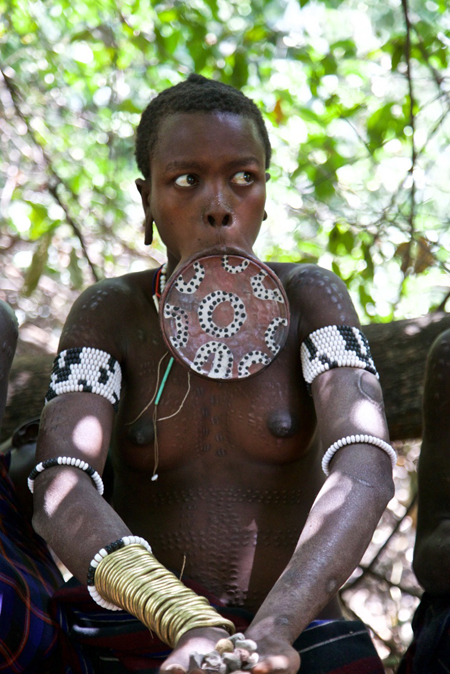 The Mursi people of Ethiopia are perhaps best know for the female practice of lip piercing. The origins of the lip plate have been lost over time, but it is still a practice that is adhered to by some Mursi women. 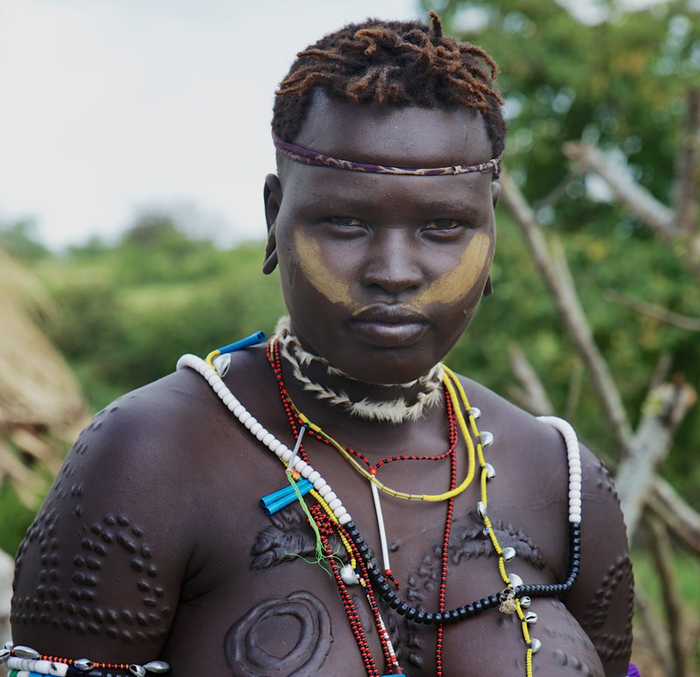 Traditionally, a woman’s marriage is arranged when she is between 12-14 years old, then, a year before marriage, when she is still a teenager, her mother or kinswoman will pierce the bottom lip to insert the first small lip plate which will be enlarged over time. But the Mursi are an egalitarian society in many ways, and today the bride-to-be chooses if she wishes to have her lip pierced or not. Many don’t, elders do not force this upon them, and there is no stigma attached to this choice. 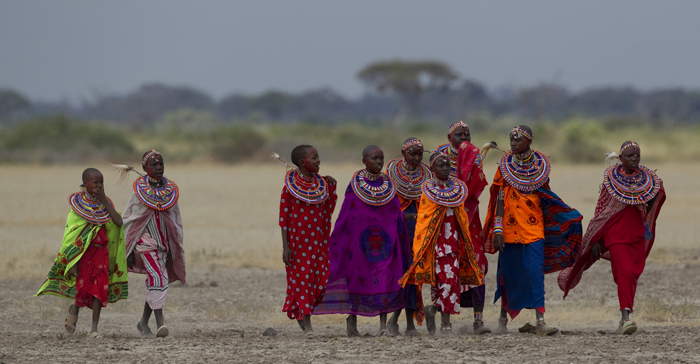 As modernisation infiltrates the once predominantly nomadic culture of the Maasai in Kenya and Tanzania, a slow but remarkable transformation is taking place. As the Maasai become more sedentary due to the constraints of land ownership, more girls are being educated. Traditionally, a Maasai girl will be circumcised between the age of 11 and 13, and married to a man chosen by her father soon after. Today, with the confidence and independence that education instills, more and more young women are speaking out and standing up to the practice. 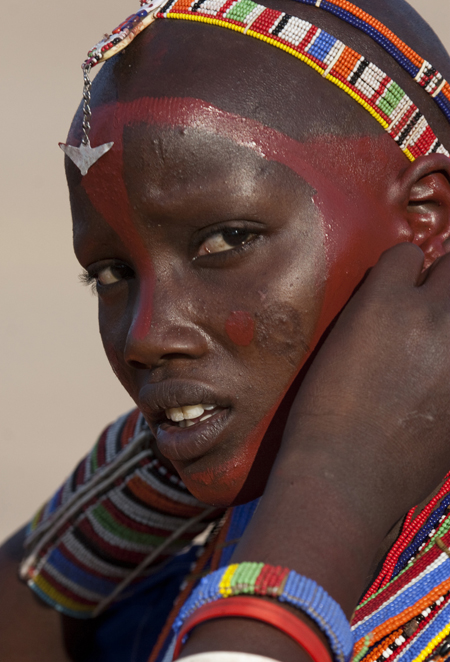 Referring to themselves as the ‘Lokop’, it is in fact their closest relative tribe, the Maasai, who gave the Lokop the name Samburu. The name is derived from the word ‘Samburr’ referring to a leather bag used to carry a variety of things. Many think their name means ‘butterfly’ in deference of the Samburu’s beauty. Traditional dress is made up of striking multi-coloured cloth enhanced with many colourful beaded necklaces, earrings and bracelets, worn by both men and women.

Less exposed to modernity in remote northern Kenya, the Samburu still lead a very traditional life. Like traditional Maasai, female circumcision is still prevalent and there is far more resistance to modern ideals. But at Umoja, a women-only village founded by victims of rape at the hands of British soldiers, there is refuge for women and girls escaping the cultural norms of child marriage, female circumcision, domestic violence and rape. 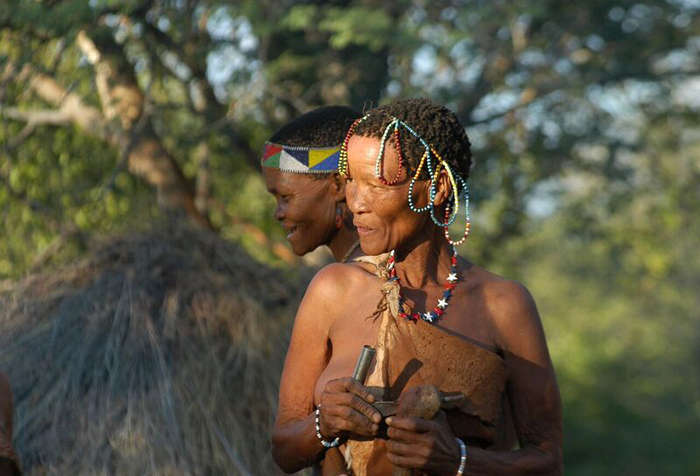 The San are one of the oldest cultures in the world, having lived as hunters and gatherers in Southern Africa for over 100,000 years. The San people’s successful adaption to the arid Kalahari, which means “Great Thirst,” has earned them the title of ultimate survivors.

Hunting done by men may seem the ultimate source of food for San communities, but with the regular gathering of roots, nuts and berries, women provide most of the food, and water. They are highly dependent on one another for survival, and the San believe in collective wealth for the community rather than individual wealth. In fact, gender roles are not very specific. Some women grow up as hunters, and men as gatherers. Due to their communal beliefs and upbringing, men also engage in child nurturing from time to time.

We will take you to Africa and give you an experience beyond measure.

Ultimate Guide to Visiting Egypt (& Not Just the Pyramids!)