Kenya presents the Africa of your dreams. It gave birth to the concept of safaris and its picturesque savannahs and national parks are among the best places to fall in love with the jungle, presenting the ultimate bush vibe.  The diversity of Kenya’s people, wildlife and habitats is superbly represented in the country’s many protected areas. While the national parks and reserves aim to protect flora, fauna and ecosystems, the private conservancies give the guests distinctive wholesome experiences that Kenya offers culturally, historically and ecologically. Some regions of Kenya are UNESCO World Heritage Sites, important bird areas and other globally significant regions. No matter how you envision your dream African safari vacation, Kenya tops your expectations in every possible way. 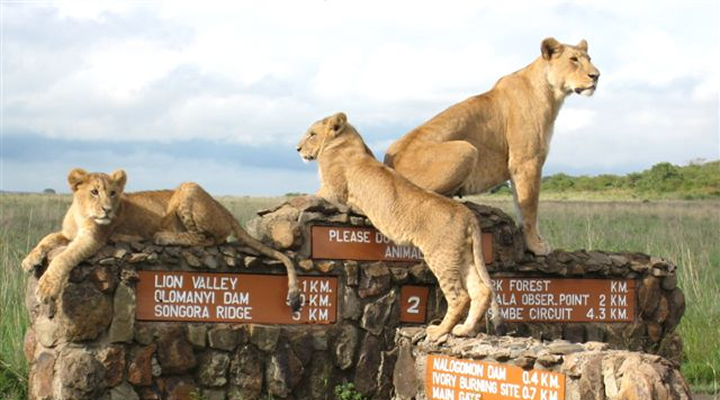 There are so many places to visit but I will just highlight the best park places you should never miss to go while in Kenya.

Maasai Mara National Reserve is one of the top tourist attractions in Kenya and the country’s most popular game reserve because of the wildebeest migration. The “Great Migration” takes place every year from July to October when millions of wildebeest and zebra migrate from the Serengeti in Tanzania to the greener pastures of the Maasai Mara National Reserve in Kenya. The Maasai Mara also has one of the largest densities of lion in the world and is no wonder this is the home of the BBC wildlife channels Big Cat Diary. 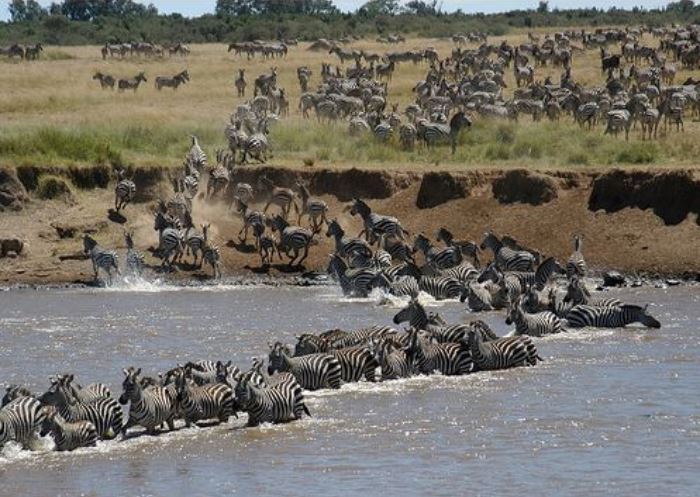 Amboseli National Park is located close to the Tanzania border at the foot of Africa’s highest mountain, Mount Kilimanjaro. It is famous for being the best place in Africa to get close to free ranging elephants. It is the second most popular national park in Kenya after Maasai Mara National Reserve because of its large numbers of wildlife which can easily be spotted due to sparse vegetation. You don’t want to miss this experience at all. 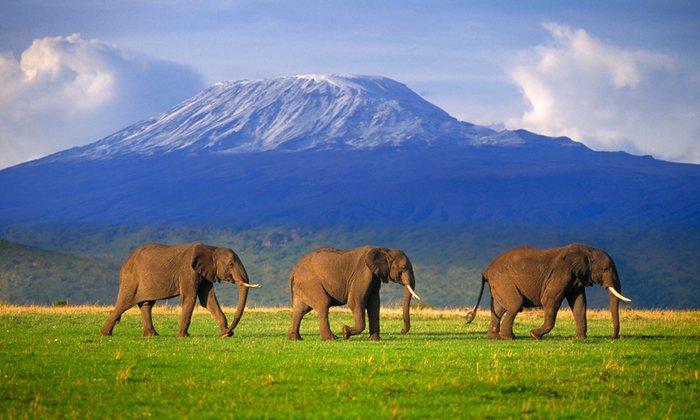 Tsavo National Park is the largest park in Kenya and one of the largest in the world. It was divided into two due to its size that is Tsavo East and Tsavo West. Most of Tsavo East national park is generally flat and consists of semi-arid grasslands and savannah. Features include the Yatta Plateau and Lugard. Tsavo West national park is made up of savannah ecosystem which comprises of open grasslands, scrublands, and Acacia woodlands. Features include natural springs such as Mzima springs and lava flows such as Mashetani lava flow. Both parks are home to the big five which include lion, buffalo, leopard, elephants and rhinos and other wild animals. 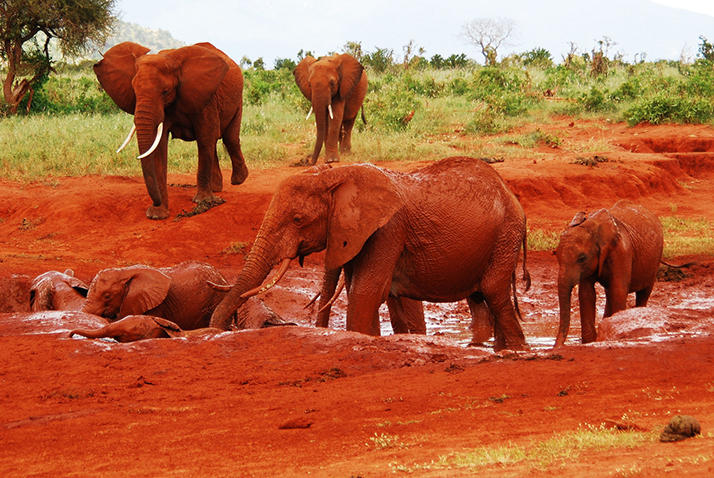 Lake Nakuru National Park is a haven for bird watchers and is located in Rift valley. The park is most famous for thousands of Greater and Lesser flamingos lining its shores. There are also about 450 other bird species within the park and around the lake such as; little grebes, white winged black terns, stilts, avocets, ducks, African fish eagle, goliath heron, hammer kop, pied kingfisher and Verreaux’s eagle. The park is also home to four of the big five, lions, leopards, buffalos and rhinos, except the elephants and also hosts other wild animals. 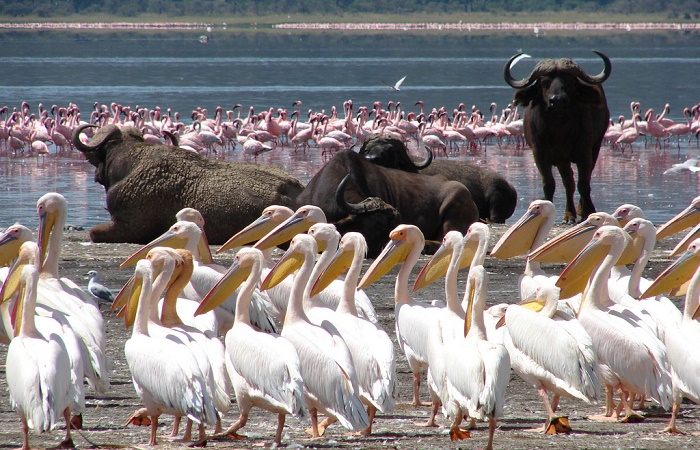 Samburu National Reserve is in the Northern part of Kenya and is home to all the big five (Elephant, Lion, Rhino, Leopard and Buffalo). In this reserve you also find the Samburu special five which only occur naturally in the northern hemisphere. They are; Gerenuk, Reticulated Giraffe, Somali Ostrich, Gravy Zebra and the Beisa Oryx. Other animals include dik-dik, impalas, Wild Dog (Endangered), Pun cake Tortoise (Endangered), crocodiles, gazelles, waterbucks among others. Over 450 species of birds have been recorded here. 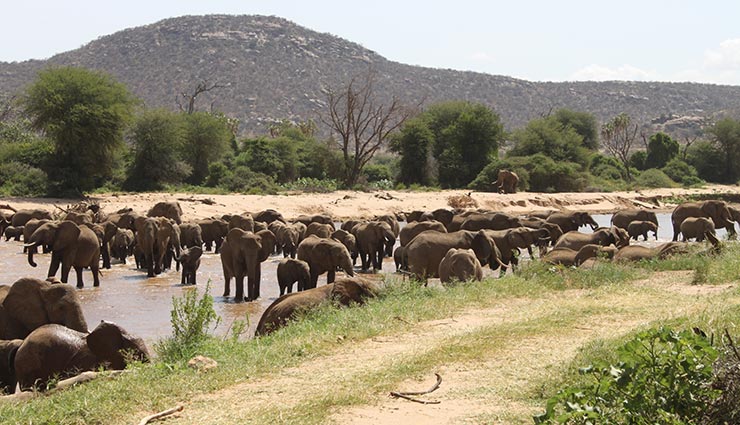 Nairobi National Park a unique ecosystem by being the only protected area in the world close to a capital city. The park has 7 gates which include ; Main gate: KWS headquarters Lang’ata road, Cheetah Gate, Langata Gate, Maasai Gate, Mbagathi Gate and Banda Gate. The park has four of the Big Five such as the rhinos, lions, buffalos and leopards, except the elephants. Apart from that there are other animal species such as cheetah, hyena, baboon, Burchell’s zebra, Coke’s hartebeest, Grant’s gazelle, hippopotamus, Thomson’s gazelle, impala, Masai giraffe, ostrich, vulture, waterbuck, zebra, wildebeest and elands among others. Over 400 species of birds have also been recorded in the park. 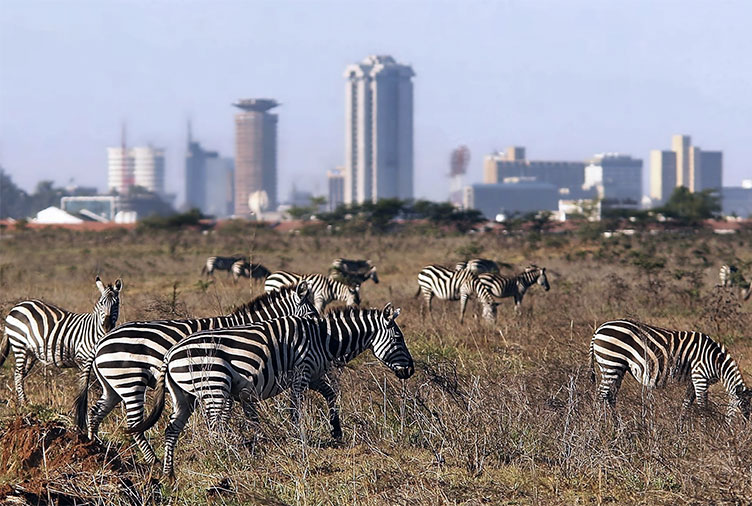 Kenya has about 50 national parks and reserves that will appeal to any traveller depending on their preference. You will also get world class accommodations in these parks appealing to anyone’s budget and liking.

For enquiry and holiday offers, contact us and you can also like/follow us on social media for updates.

Best Hotels in Nairobi to stay

What are the Big 5 and where can I see them?